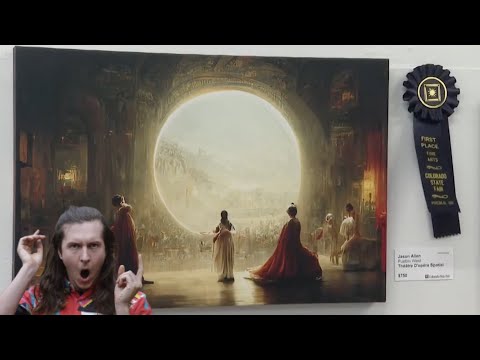 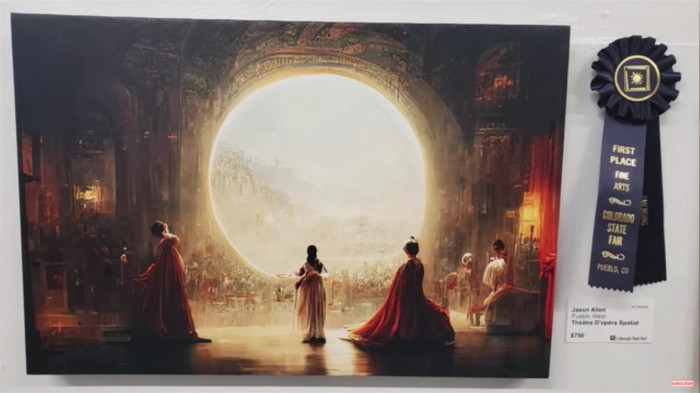 Jason Allen’s AI-generated artwork ‘Théâtre D’opéra Spatial’ was the first prize winner in the digital art category at the Colorado State Fair.
He clearly labeled his submission Jason Allen via Midjourney.
But it remains to be seen whether the judges of the competition had any idea what that actually meant.
And what that does mean is that Jason used Midjourney which is an AI algorithm that allows you to input a number of words and outputs beautiful images.
The three paintings that won the competition depict a cosmic opera.
They include baroque architecture and a number of classical figures ordained on a stage in what looks like an operatic performance.
The images are striking.
They do have exceptional use of light and tone.
The restricted color palettes do evoke the renaissance style of classical paintings.
There is an intriguing juxtaposition of classical architecture and characters with the cosmic scene folding outwards into the background.
This is undoubtedly the strongest of the three works.
The other two include some characters at different scales, again in classical outfits in a cosmic galactic scene. 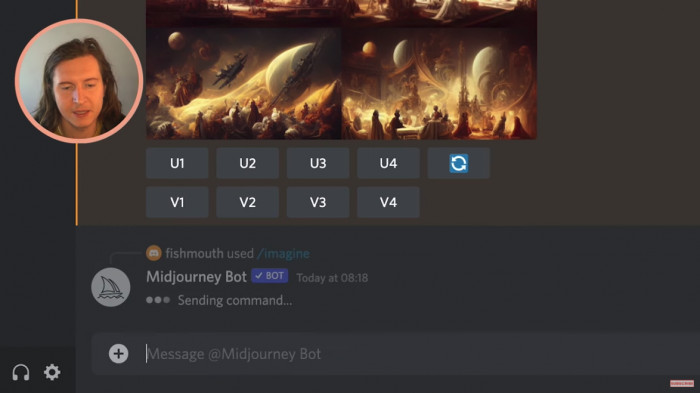 And all he did was simply use this website called Midjourney where you can put in a few words like space opera and it will spit out an image that it thinks best matches
those words.
It will pass all of the images it has access to on the internet and identifies the patterns that best match the words suggested to it.
It will then generate a completely unique image that has been inspired by all of the data it has been fed.
So I was experimenting very quickly just to see what kind of image I could bring up with some similar words.
And I’ve got something I think that’s not so far off the style and content of what Jason Allen has created.
So you may argue as many people do to all works of art.
They denigrate them and say, “Well, anybody could have done that.”

Creation of the Prize-Winning AI Art

But he says, “I have been exploring a special prompt that I will be publishing at a later date.”
So what he’s saying is that he picked a very special combination of words that he put into the machine.
This essentially accounts for having an artistic and creative skill that other people could not necessarily copy.
But if I were to respond to that, I would say that I’m pretty sure the words that he used are going to include: space and opera and at the very least, cosmic galaxy performance.
He then goes on to say that he created hundreds of images using it.
And after many weeks of fine-tuning and curating my gens, I chose my top three.
So here, he’s also saying that he used his taste to create a lot of different versions and then he refined it down to the very best.
So once again, he said he’s saying that not anyone could have done it.
Only somebody with his taste was capable of creating this type of artwork.
He then continues to say, “I had them printed on canvas after unshackling with Gigapixel AI.
Gigapixel AI is an upscaling platform that allows you to increase the resolution of images because there is currently an upper limit to the size of images that can be produced in a program like Midjourney.
He’s also arguing that the act of printing out and putting it on canvas was a creative act.
So my response once again to this is that I completely understand where Mr. Allen is coming from.
That this is a tool and some people are not going to get as good of results as others out of it it.
It is something you need to learn how to harness and understand.
It is almost like this incredible magical beast that has so much potential but you need to be able to tame it and harness it.

Can We Call AI Art Art?

So for me, the deeper question here is essentially, ‘Can we still call this art? What is art?’
And is art only creatable by humans?
I would argue that art is not only created by humans.
Art is an amorphous concept that does not have a clear and answerable definition.
I think this is another conundrum that we’re running into with the advent of artificial intelligence.

Recently there have been machines claiming that they are sentient.
The true question there for me was not whether the machines are sentient but what is sentience and how is that measured?
Are we sentient or is it just an amorphous concept that we have created in order to feel good about ourselves?
I believe that in some arrogant manner, we have put ourselves, humans, far above any other life form.
And the only way we have done that is by creating concepts that we have arbitrarily attributed to only being human.
When in fact that is not true.
There are many disgruntled artists who are starting to argue that creativity, illustration, and art are no longer going to be valued in the world. 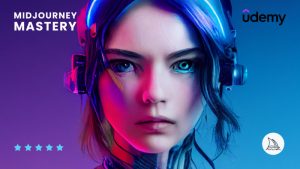 The cartoonist Matt Bors said, “Technology is increasingly deployed to make gig jobs and to make billionaires richer and so much of it doesn’t seem to benefit the public good enough…”
So what he is saying is that this new technology is only going to increase the inequality between billionaires who created this technology and remove the jobs from the
gig economy — from freelancers, illustrators, and artists who would have had much more work before this technology was invented.
He goes on to say that the developers and technically minded people, it’s this cool thing,  but to illustrators, it’s very upsetting because it feels like you’ve eliminated the need to hire an illustrator.
I have some sympathy for this viewpoint.
I worked as an illustrator for a number of years.
And I am certainly very shocked at the quality of the imagery coming out.
And I recognize that for very much of the entry-level jobs and the small jobs available to freelancers and people just getting started in their careers, this is going to take a lot of their work off the table.
By giving people the first few steps up in establishing their careers, they are not going to compete with the ease, cost, and quality of the art being generated by AI. However, those with an established reputation and portfolio of work are not going to struggle in my mind.
They will continue their careers as there will still be a need for authentic, real natural art in the highest and most advanced brands.
Mr. Allen, the creator, despite the controversy, has said,  ‘The win is only encouraging him,” he says.
“I’m not stopping now. This win has only emboldened my mission.”

In conclusion, there is currently no clear consensus on how best to respond to the rise of AI art.
But we can agree that it is something that we need to talk about in more depth.
I can envision that we will at least, in art competitions, have specific categories for AI art.
And that, it is clear when you are submitting your work what has been done by you and what has been done by a machine.
However, this is obviously a system that will be open to abuse.
And I think some of the concepts developed by Midjourney are extremely original and interesting.
I hope you enjoyed this video.
What do you think about AI art and competitions?
If you did enjoy this video, please press Like.
Just give it a Like and stick around to check out some more videos all about AI art, this new technology that is shaping our world right now.
And if you are interested in learning more about how to use Midjourney, I have created a series of lessons and tutorials on this.
You can check them out in the comments below.
Have a delightful day!
For more on Midhourney, do check out our article below.

How to Export A Time Lapse Process Video In Midjourney