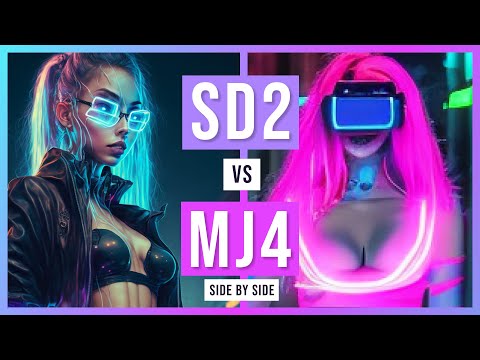 Stable Diffusion 2.0 vs Midjourney V4: Side by Side Comparison

Below we’ll check out Stable Diffusion 2 vs Midjourney by using the same prompts.

I’ve challenged Midjourney and Stable Diffusion with the same prompts and we’re going to look at them side by side.

We’ll go through a number of rounds covering from portraits to landscapes.

So let’s jump in.

Number one is a dream of a distant Galaxy.

And we can see that Midourney has a greater narrative to the piece. 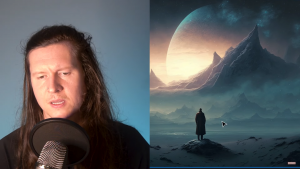 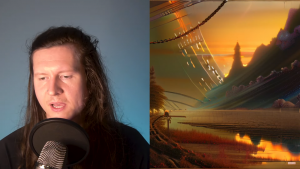 Next up we have an elegant fantasy couple kissing. 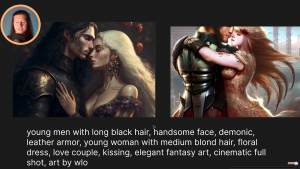 And again the consistency in the facial features and in the bodies.
The anatomy is much greater inside Midjourney. 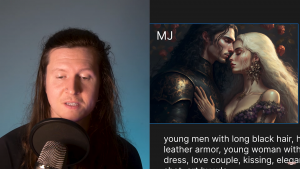 I can even say that Midjourney accurately inputted five fingers to a hand or maybe this is seven.
But the hands are still improving he’s a very coherent and easily identifiable face.

A Woman Wearing a Valentino Gown

Next up we have a tired woman wearing a Valentino gown, sitting in a roadside diner. 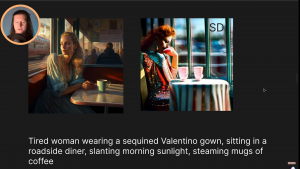 And although the hands of Midjourney are still very tiny and look more like a walnut than a pair of hands.
The overall composition and feel of the piece are much more engaging than Stable Diffusion which has output it’s something very much more abstract.
And this woman looks more like she has a trotter than a hand.

Next up we have a fantasy cyberpunk princess. 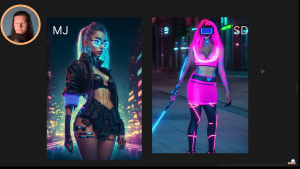 You can see Stable Diffusions version is all the more together.
Less detailed, and less intricate.
The composition and its anatomy are failing in comparison to Midjourney.
We have this girl with absolutely remarkable abs and wonderful symmetry to the background that’s leading our gaze in.
You can see these leading lines bringing us to the center of the piece.
Whereas the lines inside of Stable Diffusion lead us out of the piece.
And altogether for me, there’s something slightly more immature about the output from Stable Diffusion.
So many people have been commenting that the removal of nudity and celebrities from Stable Diffusion has had an impact on the anatomy inside of that work.

So let’s just try a celebrity to illustrate this point 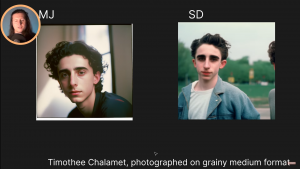 This is young Timothée Chalamet.
And you can see that the Midjourney outputting gives a greater likeness to the man himself.
But what’s interesting is that Midjourney is using a data set that is a few years old.
And this is reflected in the age that we’re seeing Timothée at.
It’s also interesting that there is still a passing likeness to Timothy Chalamet in Stable Diffusion despite celebrities being removed from the data set.
So if there’s still some sort of residue left in the data set for Stable Diffusion to still be able to identify and create a likeness.
But if we just look at the age of Timothée now looking much more adult than he does here there’s still this boyishness. 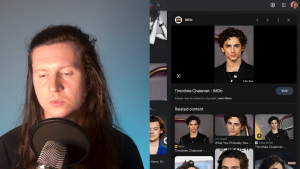 Stock Photo of A Lion

Next up we have an example stock photo of a lion and Stable Diffusion I would say is performing. 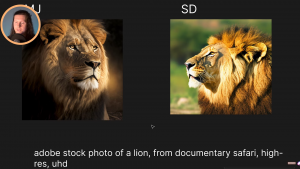 This is the closest run we’ve had between the images in terms of realism, consistency, detail, and general aesthetic.
Midjourney version just brushes out the water.
I think if you didn’t know that this was a piece of AI art and you were just glancing at it there’s no reason to think that this might not even be a real photo.
So going into more detail again the stock photo area is one where stable diffusion is catching up to Midjourney. 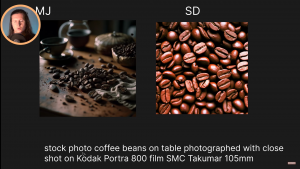 But there’s something for me overall that Stable Diffusion seems to have a less underlying taste.
And although the latest data set that they’re using is supposed to be an honest and aesthetic subset of the image database.
The way that it creates images is generally for me much more rudimentary immature and lacking in an aesthetic eye.
It kind of spits out a lot of the generic images you imagine seeing on stock sites.
Terrible stock photos.

Now when you get some very cheesy generic style images that are often very overexposed and highly saturated with unrealistic posed frame situations.
Something almost wooden and alien-like to them. 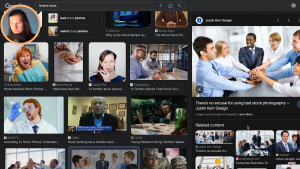 Framing the texture of the approach for Midjourney is all the more aesthetic and pleasing.
There’s something I would comment on is that Midourney often has a tendency to create things with a slightly melancholic feel to them.
It often errs on the side of melancholy.
On the deepest level, I believe we are most attracted to one of the things that bring us the most joy.
But the things that allow us to see the darkness in ourselves and the depth of Midjourney are picking up on this.
We don’t want all rainbows and butterflies sometimes we want to explore our shadows.
And there’s a reflection at the deepest level with Midjourney identifying this inside of our culture.

Finally, we have a landscape composition. 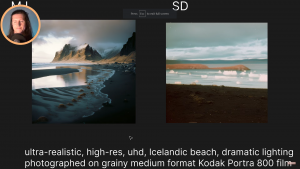 This is an Icelandic beach.
And although Stable Diffusion performs much better and landscapes, still-lives, and stock photos.
It’s not quite at the same level as Midjourney.
Personally, my view is that although Stable Diffusion is taking steps forwards it’s also taking steps backward with anatomy and consistency stepping down whilst landscapes and still life are stepping up.

Now I’ve taken those same prompts that I’ve used and added in some negative prompts. 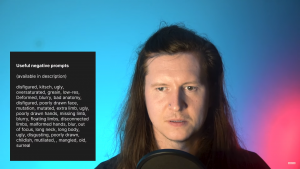 And you can see that the improvement just from taking one image and improving it with negative prompts has had a huge impact on the quality. 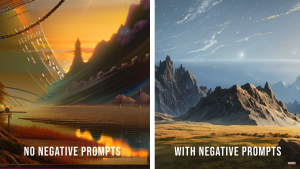 So, let’s compare these latest versions between Stable Diffusion and Midjourney.

Personally, I still prefer the Midjourney image, but Stable Diffusion has outputted something that is coherent, beautiful, and consistent.

Midjourney versus the no negative Stable Diffusion version there’s no question. 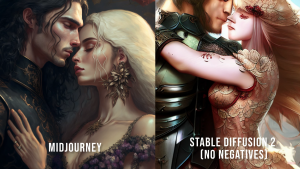 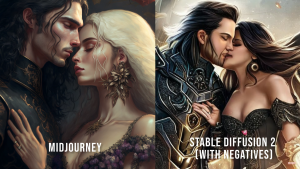 Now, this is a little bit unfair because these examples are using the same prompt.

But what I did was I went into Stable Diffusion and tried to get the best that I could.

Now, which of these two do you prefer? 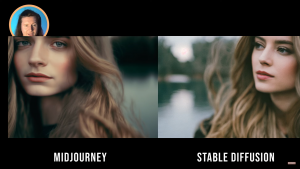 I would say that the consistency in the features is actually better in Stable Diffusion here.

And this woman has a slightly large nose.

This image was taken from this gentleman Roope Rainisto who’s been getting some really beautiful things out of Stable Diffusion. 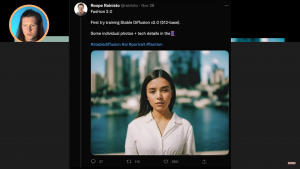 But I took one of his images and I tried to recreate it myself inside of Midjourney. 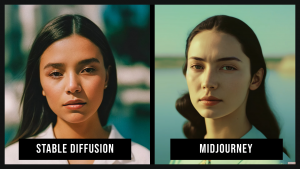 The image from Stable Diffusion is incredibly lifelike.

But there’s just something about its tendency to create very saturated images using a whole color spectrum, but these are very fine minor points.

And you can obviously fine-tune Stable Diffusion.

Further here are some more beautiful examples of the works possible in Stable Diffusion.

I will leave a list of all of the negative prompts that I used inside of Stable Diffusion in the description below.

You can see here this was the Midourney version. 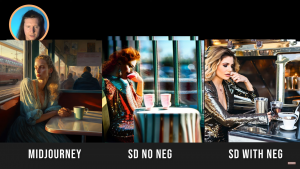 There’s something emblematic for me about how I interpret Stable Diffusion.

It’s trying to be too sparkly sometimes.

It’s trying to put as much spark and jazz inside of itself as it can whereas Midjourney can help with something a little bit more understated.

But this woman does have hands like a walnut.

And this woman’s hand here is pretty remarkably anatomically correct. 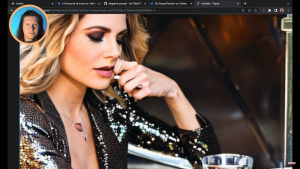 Apart from this finger.

My overall view is that both of these platforms are offering great creativity to those who are willing to explore deep inside of them.

Midjourney has the advantage of having some inbuilt taste and aestheticism in its works.

So you can pretty much put anything in and you’ll get a reasonably beautiful output which is advantageous in some situations.

Whereas stable diffusion gives you much greater control features and possibilities for creating obviously content without restrictions on nudity.

Both are accelerating fast and I’m a huge fan of both of them.

I personally will continue to use Midjourney for my work.
Let me know what you think in the comments which are your favorites and what are you looking forward to most in the future.
I’m Samson Vowles, this is Delightful Design.
Have a delightful day.
For more interesting reads, check out our other articles below.