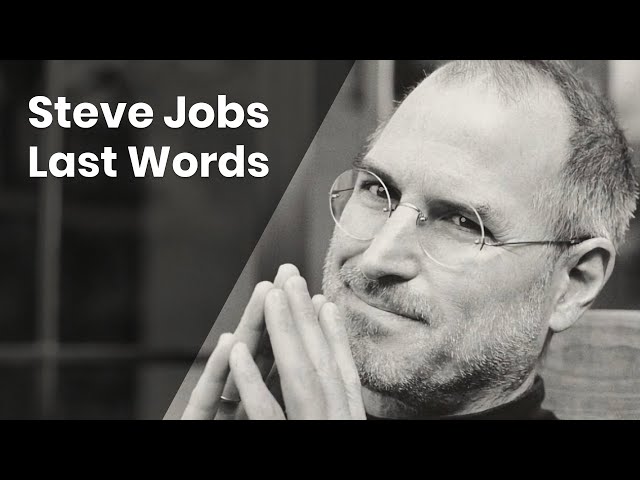 Steve Jobs last words are often cited to be: I reached the pinnacle of success in the business world.

In others’ eyes, my life is an epitome of success.

However, aside from work, I have little joy.

In the end, wealth is only a fact of life that I am accustomed to.

At this moment, lying on the sick bed and recalling my whole life, I realized that all the recognition and wealth, I took so much pride in have paled and become meaningless in the face of impending death.

You can employ someone to drive the car for you, make money for you.

But you cannot have someone to bear the sickness for you.

Material things lost can be found.

There is only one thing that can never be found when it is lost.

Although these words maybe moving, no one ever connected to Steve Jobs claimed to have heard the speech and it only appeared four years later, after his death.

The true origin of this speech is unknown.

But we do know what Jobs did say on his death bed.

In 2011, when Jobs died of pancreatic cancer, his sister, Mona Simpson, spoke at the funeral.

It is tempting and romantic to idolize the false message of prioritizing the importance of health and not getting lost in emptiness and material success.

But there is a poetic beauty to the short words that were Steve Jobs final epigraph, ‘Oh wow, oh wow, oh wow.”

If you enjoy videos about design and technology, why not follow along and leave me a comment below with what your final words will be on your death bed.

Thanks for watching and I hope you don’t die today.

If you enjoyed this video on Steve Jobs’ last words, do watch our other videos below.

Is LaMDA Sentient? What is Sentience?

How to Use Clipping Masks in Procreate